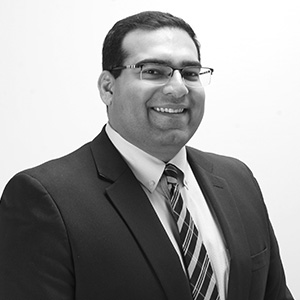 Dr. Mithani joined Advanced Heart Care in 2017, after completing his cardiac electrophysiology fellowship from Cooper University Hospital.  He is interested in all areas of cardiac electrophysiology including device and ablation-based therapies. This includes implantation of pacemakers/defibrillators/cardiac resynchronization therapy, laser lead extraction, and in ablation of complex arrhythmias. His special interests are in subcutaneous devices, catheter based left atrial appendage closure devices and leadless pacemakers.  His appreciation for all aspects of cardiology complements his ability to understand and care for patients with arrhythmias, in and out of the electrophysiology lab.

Dr. Mithani has participated in numerous research projects and has been a co-investigator in several prospective multi-center research studies.  He has published numerous abstracts and manuscripts during his training and has presented his research at various local and national meetings.  He was awarded first place in clinical research at the Camden Scholar’s Forum in 2015 at Cooper University Hospital

He is very dedicated to his career and always puts patient care as priority. He thoroughly enjoys the field of electrophysiology and truly loves interacting with patients and making a difference in their lives.

His interest rest in gaining a better understanding of the healthcare inequalities around the globe and being able to spend time doing volunteer work in the third world countries.  This interest has helped him get involved with community service projects.  When not trying to solve worldly problems, he likes to enjoy traveling, watching movies and spending quality time with family and friends.

Areas of expertise and interest